Koffee with the King Blog

Koffee with the King Blog

In returning and rest you will be saved;
In quietness and confidence shall be your strength. -Isaiah 30:15

Dark were the days that dawned truth of missing God over 10 years ago.  Nothing hollowed me like the moment I realized I had gotten off track somehow.  I was a survivor of all kinds of dark things, unfair things, unimaginable things…abuses, abandonments, infidelities, divorces to mention a few but nothing like this.  Nothing leveled me quite like this.   I thought I had found safety, a haven of wholeness tucked secretly out of sight in a world where God spoke.

How could I have been so wrong about so many things? Dark doubt bore into my soul and all of the good leaked out with ugly.  Him ugly? No, the part about missing Him, misunderstanding Him was ugly.  But how?  How could I have traveled so far, so long and Him not stop me?  What did it prove? That I was crazy?  That He’s mysterious, unable to be understood?  I was done.  No more.   I couldn’t separate what He said from what I said about my future.  So it was safer to stay away.  And so I did, for almost two years.  I stayed tucked away, hidden deep in the pseudo safety of silence.  I

was near Him, but I couldn’t bear to hear Him.  What if I misunderstood again?  I couldn’t take it.  I was uncertain about everything.  Everything!  I couldn’t step out in faith again only to be wrong.  And then, just for brief moment, the whisper of hope broke through the silence with one sentence: “in returning and rest you will be saved; in quietness and confidence shall be your strength.”  And that was it, that’s all He said.

I still spent time with Him. Mainly just sitting there, reading His word.  But never talking about future events, or how I missed Him that dark season.  It was too fresh, too painful.  I still went to church, served in a less audacious capacity but never lifted my eyes to dream.  Dreams were dead.  But I learned something limitless in that season of silence.  As I returned to Him day after day, resting my head against His chest, sitting in stillness and quietness with only the sound of the breath He gave something began to grow inside.  Quiet, steady confidence was birthed in the alcove of my silent sanctuary.  For now I saw the tender heart of God who sat beside me never needing me to do anything for Him.  He was in no hurry.  It was always me.  It was always me that lived in a ferocious headlong frenzy to do the will of God.  He wasn’t sitting on pins and needles hoping I’d snap out of this fearful stupor to go about accomplishing His great plans for me.  He was much more focused on saving me from my grief.  No, God’s never in a hurry.  He doesn’t long for us to do something for Him more than He longs for us to know Him, and love Him, and let Him love us.  Anything after that is just icing.

It’s the enemy and our selfish ambitions working in tandem that push, and drive us beyond God’s speed.  No accomplishment supersedes the place of quiet confidence and trust in Him.  No level of success outshines the beauty of walking hand in hand while He opens doors.  And try though we 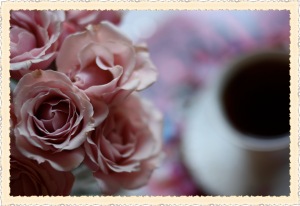 may we will not thwart the plans of God, nor rush them.  So go with God.  Seriously, go with Him and at His speed.  Save yourself the heartache of disappointments.  Even if you only move one inch at a time, embrace the safety of a Savior who savors every moment with you.  And return to this haven of peace morning after morning, cup after cup.

YOUR KOFFEE WITH THE KING:

Spend the next 20 to 30 minutes returning to rest found only in God.  Focus your heart completely on Him.  Allow the Holy Spirit to bring anything up that you have done that has hurt the heart of God, and repent.  Continue to sit in His Presence and soak Him in,  always writing down anything that He shares with you.   Are you ready to breathe Him in?

Over the next week, study the following passages to learn more on being still and knowing God.  Continue to have your daily Koffee with the King  and enjoy those deep conversations. Continue to ask Him questions to get to know Him better.